A game from the run of the Cumbrian County Team in the Online County Champs has come to an end with a 6 - 7 close loss to Oxfordshire in the semi-final, here i show my game with Joshua Soanes of Oxfordshire.  He plays real tough and goes steaming ahead during the late middlegame early endgame.  The howler i make in the final positions is due to not being able to cope with the threats from his extra pawn, and i was clearly lost at that stage. I am Alan Llewellyn in white. 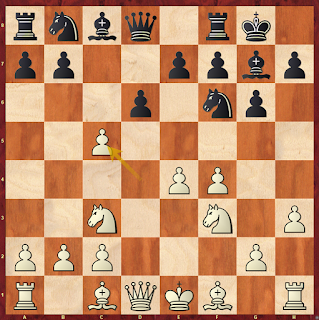 I am having many miniatures it seems these days I am winning with them a lot, here in the ICC(Internet Chess Club) Team 45 45 event which is a team event of slow chess played over several weeks, my opponent with the handle Olivermx from mexico was white and , makes a fundamental mistake of pawn grabbing instead of castling. This is a standard Pirc Austrian Attack position except for the last move made by white, the moves were 1 e4 d6 2 d4 Nf6 3 Nc3 g6 4 f4 Bg7 5 Nf3 0-0 but here my opponent plays a slightly dubious move in playing 6 h3 I decided to try and take advantage of his slow development by playing very dynamically with first 6...c5 and after 7 dxc5 we have reached the diagram above.
here i decided to play the provocative 7...Qa5! and he fell for the trap with 8 cxd6? now it looks like I am two pawns behind with material but i can easily get the pawns back with accurate play and the computer agrees with me giving Black a sizable but not winning advantage of about 0.85 pawns I played another provocative move in 8...Nxe4!! and you can see that I have quite an attack going on the now very weak c3 square he played the obvious 9 dxe7 Re8, luckily enough the d8 square is covered by my Queen else Qd8 by him would be a good move now if he plays 10 Bd2 here i play 10...Bxc3 11 Bxc3(on 11 bxc3?? Qc5 is strong) Nxc3 12 bxc3 Qxc3+ 13 Kf2 Be6 the point behind this move is if now 14 Qd8?? Nd7 traps the queen. Anyway Black gets his two pawns back with an attack hence the advantage. But faced with an uncomfortable game my mexican opponent badly blunders with 10 Qd5?? and after 10...Bxc3+!? he resigns having lost his Queen.
Posted by Alan Llewellyn at July 28, 2020 1 comment: 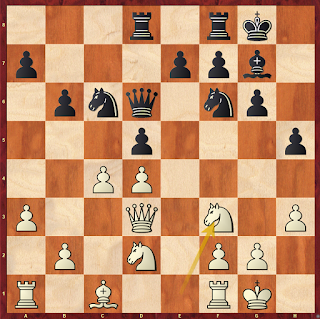 This is a position from a game in the online County Championships in the Match Cumbria vs Shropshire, I was board 14 as Black(Alan Llewellyn) playing David Lovegrove i think it was the 18th July 2020
I played the deceptive looking 15...g5!! here the point is after 16 Nxg5?! Nxd4!! and then 17 Qxd4?? Ng4! he has nothing better than to play 18 Qxg7! but instead he fell for it hook line and sinker and played 18 Qxd5?? for which i mated him with 18,,,Qh2# My opponent must have assumed i was drunk and taken his eye off the subtly behind each move.
Posted by Alan Llewellyn at July 26, 2020 3 comments:


Here is a list of FIDE registered tournaments in England. There will be a separate entry for each section of each event (e.g. Golders Green Rapidplay = 4 sections, 4 registrations). If you see any of mine missing, do let me know!